No Good Options in Syria, Including Inaction

On January 11, I criticized Marwa Daoudy’s argument against military intervention in Syria, and on February 6 I rebuked common arguments against humanitarian intervention generally.  While this choice of topics suggests an adventurist bias, I remain ambivalent on the question of whether (and how best) to intervene in Syria. 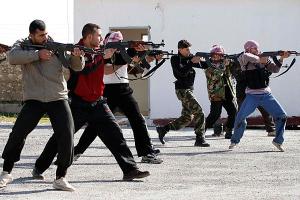 Is arming Syria's opposition worth it?

The most widely discussed option for doing so is using Syrian rebels and defectors as proxies by arming and supporting them, though one hears phrases like “safe havens” and “air support” in the discourse as well.  Advocates and opponents of intervention agree that the isolated and blood-soaked Assad regime is finished, despite the support it still commands among some minority communities in Syria.

Let us weigh the arguments, keeping in mind that this question is already more than hypothetical.

Marc Lynch, counseling prudence in a recent blog post, poses six important questions to those who would intervene: Whom to arm?  How would arms affect the opposition?  What is the endgame?  How would the regime react?  What if the rebels, once armed, fail?  What if they succeed?  His answers amount to four broad warnings: that arming the rebels will divide and corrupt them, that it will cause violence to escalate, that it will lead to mission creep, and that it will prolong the war by turning into a costly stalemate.

Roger Cohen acknowledges in The New York Times that such a stalemate is likely, but asserts that it is also necessary in order to force Assad to negotiate.  He is in favor both of arming the rebels and of establishing refugee havens in neighboring countries.

Professor Lynch’s concerns seem prescient.  I believe they are.  But most of them will not be fundamentally exacerbated by our arming the rebels.  The factors militating against arming the rebels—our lack of familiarity with the rebels, the potential for political ambition increasing in step with physical power, the potential for increased conflict, and the reluctance of rebels to disarm after they remove Assad—are problems we must confront regardless of whether we are the ones to arm them.

He lists three possible goals for arming the rebels, and dismisses each: if the weapons are defensive, they will inevitably sow instability.  If they are meant to enable the rebels to unseat the regime, then they are insufficient.  If they are meant to effect a stalemate and talks, the plan will backfire as the flood of weapons ignites a civil war and the chance for a peaceful resolution dies.

Civil war has already come to Syria.  Assad is already refusing to negotiate.  The international community may call for high-scale intervention in the future whether low-scale intervention occurs now or not.  Disunity and instability will attend any post-Assad scenario.  It is also by no means clear that simmering slaughter is preferable to all-out war in the long run.  1994 Rwanda reminded us that widespread savagery, at least sometimes, is possible without advanced weaponry.

There are also those who warn of boosting support for the regime by confirming narratives of a foreign insurgency engineered by the West.  This should only makes us hesitate to arm the rebels, though, if it means that doing so benefits the regime more than it benefits the rebels.

Unavoidable truths loom in Syria no matter what the world does:  Distrust and tension will prevail with or without Assad.  Instability will persist.  Many more Syrians are going to die.

The prerequisite for intervention should not be certainty of a perfect outcome, as some appear to think it should  We will carry regrets down any path we take.  Rather, we should ask, given what we know and can reasonably predict, whether the good we can do by arming Syria’s rebels outweighs the bad.