What is Going On in Mali?

Today marks the one-year anniversary of the start of the conflict in Northern Mali.  The conflict has changed dramatically since January 16, 2012, however.  And with last week’s intervention by the French military and today’s seizure of several dozen hostages at a gas field in Algeria, Western populations are increasingly wondering: “Mali?  Where is that?” 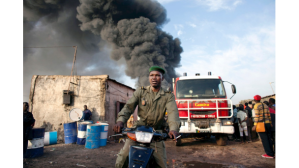 Here’s the situation.  Northern Mali, also known as Azawad, is populated mainly by the Tuareg, a Berber people who inhabit the arid interior of West Africa between the mostly Arab north and the mostly black coastal areas.  Many Tuareg served in the Libyan army, which disintegrated in 2011 during the Libyan uprising against Muammar al-Qaddafi, sending both Tuareg and weapons flooding into neighboring countries.

In Mali, this influx catalyzed an insurgency movement aiming to liberate Azawad from Malian control (although Tuaregs rebelled in Mali several times before the fall of Qaddafi).  The insurgents organized under the banner of the National Movement for the Liberation of Azawad (MNLA).  In March, the Malian army lost faith in the president’s ability to fight the insurgents, and removed him from office.  Two weeks later, the MNLA took advantage of the instability in Bamako and declared Azawad independent.  At that point, it controlled virtually all of Azawad, which makes up more than half the country—an area roughly the size of Texas.

Sounds like it’s just an ethnic war.  Why all this talk about jihadists?

So where does al-Qaeda come in?  Well, there have been militant Islamist groups in North Africa for decades, and during this last Tuareg uprising, a group from Azawad called Ansar al-Dine had aligned itself with the MNLA against the government.  But once the fighting died down, Ansar al-Dine began implementing a harsh form of sharia and calling for the complete overthrow of the Malian government.  In April, the group announced that sharia was to be implemented in Timbuktu.  It also rejected the MNLA’s call for independence.  Some amputations and executions were reported.

Since the spring, the rift between the Islamists and the Tuareg nationalists has widened such that the MNLA supported Operation Serval, the French intervention launched last week to counter the Islamist fighters.

Today, the French army fought militants in the recently conquered town of Diabaly.  The battlefront extends across Mali’s narrow midsection, separating the government-controlled South from the rebel-occupied North.  Meanwhile dozens of foreign nationals, including Americans, were taken hostage at a gas field in Algeria, just across the border from Libya.  Algerian forces have surrounded the field, but the standoff has yet to be resolved.  The attack has raised eyebrows in the energy industry, which generally considers Algeria a safe place to do business.  It appears that the seizure is a response to Operation Serval.  Al-Qaeda in the Islamic Maghreb, a group that seeks to overthrow the Algerian government and attack Western targets, has taken credit.

The French public supports the intervention almost two to one.  A variety of causes may be behind this support, including a sense of responsibility for a former colony, economic interests (Mali is a major gold producer and borders Niger, a vital uranium exporter), and security concerns.

France originally planned to provide aerial support and logistics to an African-led intervention.  Alassane Ouattara, the President of the Ivory Coast, was planning to take the lead in Mali in his capacity as chairman of the Economic Community of West African States (ECOWAS).  The plan was for African ground troops to restore security in Mali, with support from France, but without French boots on the ground.  However, when French bombardment proved unable to stop Ansar al-Dine from beginning an offensive aimed at taking the whole country, President Francois Hollande sent in troops.

It’s not just France that cares about Mali.  Control of such forbidding territory gives jihadist groups breathing room and access to weapons (especially after the implosion of Libya) and cash (from ransoms and exploitation of South American drug-smuggling networks that have begun taking advantage of weak states in West Africa).  I should note that in mid-nineties Afghanistan,  another little-known fundamentalist force called the Taliban began to thrive under similar conditions: lawlessness, a glut of weapons, and a source of income (charging Pakistani truckers for safe passage on Afghan roads).

Since 9/11, many of us dearly wish someone had nipped that in the bud

UPDATE: The BBC reports that many hostages have escaped.  The captors’ demands include a full French withdrawal from Mali.